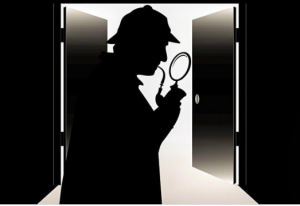 Our exciting new adult online course How (not) to think like Sherlock Holmes starts this week! Running over 5 weeks from this Thursday 30th July at 19:00 - 20:30 (BST) come and discover the reasoning skills of the Master of Deduction. And learn from his mistakes.

Places cost £50 for the whole 5 weeks or you can book on a weekly basis for £10 a session and are limited so book yours here now!

Still not sure its for you? Read on for the course's creator, Dr Lisa McNulty's breakdown of what you'll be musing (and amused by) each week.

Week One:
We’ll explore the question of whether Holmes deserves the title of Master of Deduction. Drawing on a scene from the BBC adaptation Sherlock, we will assess the strength of Sherlock Holmes’ crime scene analysis, learning something about good and bad argument structures along the way. We’ll differentiate between deductive soundness and validity, and inductive forcefulness. We’ll uncover some of the implicit assumptions in Sherlock’s reasoning, and consider whether the crime scene could be explained in a very different way.

Week Two:
Having suggested that there may be a discrepancy between how good Sherlock’s arguments are perceived to be by others, and how good they actually are, this week focuses on the idea of persuasiveness and privilege. We’ll use Holmes as a framing to explore the idea of epistemic injustice: the unfairness of being believed or disbelieved owing to reasons other than the strength of your argument. We’ll discuss what it means to ‘argue well’, and how this relates to ‘having a good argument’.

Week Three:
Holmes’ approach to reasoning can be summed up in the famous phrase: ‘When you have eliminated all which is impossible, then whatever remains, however improbable, must be the truth.’ We’ll question various aspects of this idea, including: What do we mean by ‘impossible’? Can we in fact ‘eliminate’, or rule out, ‘all which is impossible’? Is this a common or advisable way for investigations to proceed? And are we in fact less justified in believing the impossible than in believing the highly improbable?

Week Four:
Holmes is the archetypal solitary genius. He is a consulting detective, the ‘only one in the world’. He has an extreme degree of specialization and (Watson aside) a very limited social circle, whose intellects he does not generally respect. The result is that Sherlock generally thinks for himself. We’ll explore the difference between thinking ‘by’ ourselves and thinking ‘for’ ourselves, and why specialization requires trust in a broader epistemic community.

Week Five
Sherlock Holmes is careful to stock his ‘brain attic’ only with knowledge pertaining to his vocation. This deliberately chosen ignorance leaves him peculiarly vulnerable to ‘unknown unknowns’. These can be understood as ‘answers to questions we haven’t thought to ask yet.’ Here we will examine Sherlock Holmes’ capacity to deal with unknown unknowns. In particular, we’ll look at why Holmes may not know that he doesn’t know all the right questions to ask, and we’ll consider the difference between treating other people as a source of information and treating them as a source of knowledge.

If you'd like even more detail about the course you can read Lisa's blog posts on her website here.