Greek myths are fascinating, no less today than in the past. For my students one myth stands out: Daedalus and Icarus. The story has been told and retold hundreds of times. Here is mine, based on the account by the Roman author Ovid in his ‘Metamorphoses’. 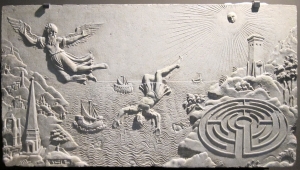 Daedalus was a very talented artist. It is said that he created statues that were so realistic that they had to be tied down to stop them from wandering off!

One day, king Minos invited Daedalus to the island of Crete. The king wanted Daedalus to build a maze, a Labyrinth, for the king's Minotaur. The Minotaur was a horrible monster, with the head of a bull on a human body. It was born from the king’s wife, who had slept with Zeus, who had disguised himself as a bull. King Minos was very embarrassed that this had happened and decided to hide the Minotaur.

Daedalus planned to make the maze a challenge, so complicated that anyone who entered would be lost … and eaten by the Minotaur.

King Minos was happy with the maze, but he was afraid that Daedalus would share his knowledge of the Minotaur and the Labyrinth with his people on the main land. So he locked Daedalus up in his palace, together with his son Icarus.

Daedalus tried to think of ways to escape. One day, he noticed birds flying overhead. It gave him an idea: ‘King Minos rules everything but he does not rule the sky’. Daedalus gathered all the bird feathers he could find, arranged them in a gentle curve and glued them together with wax; they looked like real bird’s wings. He made two pairs of wings, one for himself and one for Icarus.

“Let me warn you, Icarus, take the middle way, because the moisture will weigh down your wings, if you fly too low. But if you go too high, the sun will scorch them. Travel between the extremes and take the course I’ll show you!”

Daedalus fastened the wings to their arms. They flapped their wings and took to the sky. They left the island of Crete far behind them. Water sparkled beneath them as far as they could see. The sky was blue. The breeze was brisk, more than enough to keep them in the air. It was glorious!

Icarus enjoyed his daring flight, and forgot his father’s warning. He soared higher and higher, so high that before he knew what was happening, the sun had begun to melt the wax on his wings. Icarus felt himself falling. He flapped his arms faster and faster. But it was no use. Poor Icarus plunged into the water and drowned. Daedalus looked down and saw the feathers floating on the waves. At a nearby island he landed, buried his son and cursed his invention.

My students loved these questions most:

1) Why didn’t Daedalus’ warning work? Should he have warned in a different way?

2) Are there more examples of inventions which (can) have very negative consequences?

Would I change who I am?

Do you change? Yes, we all do. Do you change who you are? Well, that’s the question. Read more