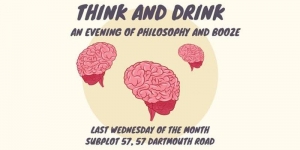 Last night Emma and I ran the fourth of our ‘Think and Drink’ philosophy evenings (for adults!).

The themes have been:

Week one: The Pre-Socratics

The next two meetings will be:

The format is part-presentation and part-group discussion, with an emphasis on the latter. 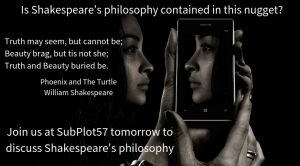 Last night’s session, ‘Shakespeare and philosophy’, to mark his birthday (well, nearly) started with the well-known – slightly parodic – question, ‘How do you know everything isn’t just a dream?’ Somebody mentioned the word ‘scepticism’ and we talked about whether Shakespeare was a sceptic or not. This was placed in the context of Descartes’ Meditations (1641) and Montaigne’s Essays (1580), the latter being a direct influence on Shakespeare. 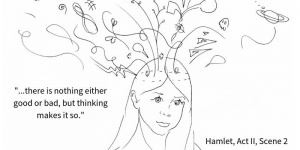 After the ‘gin break’, we had some fun considering global scepticism using Robert Nozick’s Matrix-esque thought-experiment ‘The Experience Machine’: if you could have a virtual world just as you want it, in which you believe it to be the real world, would you ‘plug in’ to the machine? This triggered a fabulous discussion around the values that emerge from considering global scepticism, which, of course brought us back to Shakespeare; in particular: Hamlet.

Drawing from Colin McGuinn’s excellent ‘Shakespeare’s Philosophy’, we considered Erving Goffman’s idea of the ‘dramaturgical conception of the self’ in the context of Hamlet and his own search for an identity. This brought us to Sartre’s famous ‘café waiter’ passage in Being and Nothingness, to As It You Like It’s ‘All the world’s a stage…’ speech, via David Hume’s ‘bundle’ theory of the self and more Montaigne.

One question that was asked was: ‘Are we doing the philosophy of Shakespeare or the philosophy in Shakespeare?’ and it became apparent that you can’t do one without the other. Not unlike Goffman’s theory, we can ONLY know Shakespeare through the dramatic works he left us, so, we have no choice BUT to try to evince a philosophy from the philosophies that emerge from the plays. We faced a similar problem with Plato and Socrates, but this is what McGuinn thinks emerges from Shakespeare’s scepticism:

“The sceptic, we might say, is a kind of tragedian about knowledge: he admits that Aristotle’s dictum is correct – people desire to know; they are not indifferent to knowledge – but he claims that this desire is necessarily thwarted. Thus a basic value in human life is declared unrealisable, and this is our tragedy.”

We have a number of regulars each month now and a couple of drop-ins each time. Everyone is welcome, the drinks are lovely and we aim to make the atmosphere as fun and engaging as possible. One attendee told us that after the last meeting she went home and her husband asked, "How was the lecture?" "There wasn't a lecture, it was all of us discussing The Euthyphro question together." "Oh god! You had to talk with strangers all evening, was it awful?" "No, it was great, I'm going back next time."

The meetings are held at Subplot57 (a private gin bar), Dartmouth Road, Forest Hill (Under ‘Leaf and Groove’ bookshop), between 7 and 9 (sometimes stretching till 9.30-10pm) on the last Wednesday of every month. Next month it will be May 22nd (we're away for the last Wednesday of the month then). To book a place at a cost of £6 per person (including Eventbrite fees) please go here.