This activity, apart from being a lot of fun, helps the children develop a metacognitive (self-monitoring) attitude towards (moral) decision-making. For instance, if you are discussing a child’s own behavior with them, you could say, ‘What would you advise yourself to do in situation X? You know, like you advised the ant in last week’s philosophy session.’ Begin by reading or telling the story or scenario to the class. Stop the story at whichever point is appropriate; it may be just before the characters do something in particular (to advise), or it could be just after (to evaluate), or both (to advise and then to evaluate). Another way to vary this is to have class members take on the role of the character in order to have the class advise/evaluate a ‘real person’ and to have some kind of interaction between the class and the character. Some children will really enter into the role-play aspect of this activity, representing views they don't necessarily hold but that are consistent with the character from the story. This offers a further position of remove for the children to inhabit, away from ‘themselves’ and towards an ‘other’. Here’s the procedure with the story of The Ant and The Grasshopper. (It would work well with dialogues too. See https://www.philosophy-foundation.org/blog/dialogues-in-philosophy-with-children ) 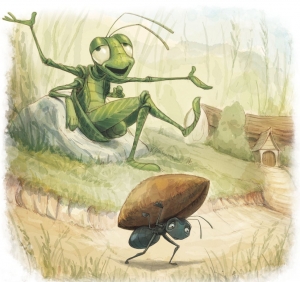 To facilitate you may need to offer some options to help open the issues up, such as asking for the group to consider unexplored lines of enquiry, ‘Are there any reasons why the Ant should say ‘Yes, I will help you’?’ especially if the children are saying similar things. Unanimity can sometimes happen because the narrative urges them to a particular view.

Though I’ve illustrated the procedure through the example of the story of The Ant and The Grasshopper, it can be used in many narrative situations where you want to activate the moral agency of the class/audience. Try it with The If Odyssey, stories from Once Upon an If  (particularly ‘The Sindbad Stories’) and The If Machine such as ‘Billy Bash’, ‘The Lie’, with any ‘dilemma’ picture/story books such as The Tunnel by Anthony Browne, or dialogues (see link). You will often find little ‘dilemma’ moments (that one could almost overlook!) in books where you can invite the children to engage, such as in Jon Klassen’s lovely book This Is Not My Hat in which the little fish has asked a lobster not to tell the big fish where he has gone, the big fish then arrives at where the lobster is. Before turning the page to reveal what they lobster does, invite someone up to be ‘the lobster’ and someone else up to be the ‘big fish’, then turn to the audience and ask them. Also, make use of my ‘is-ing and oughting’ (see the lesson plan for The Ant and The Grasshopper for more on is-ing and oughting) strategy here and break up the questions you ask into conceptually distinct parts:

Dialogues in philosophy with children

Pete offers some practical advice on how to use dialogues to do philosophy with children.  U... Read more

Mobile Mall and i support your team