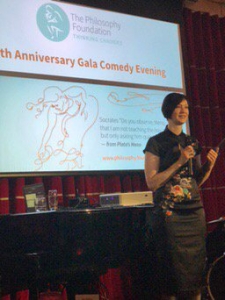 Good evening everyone. My name is Emma Worley and I am the co-founder and co-CEO of The Philosophy Foundation. Thank you all for coming to help us celebrate tonight. Many of the people in this room have helped us beyond measure by lending your support, talents and expertise over this time – thank you, you know who you are and if I were to name you all indiviudally this welcome talk would go on far too long. But sincerely, thank you.

It has been an amazing journey: back in 2007 Pete (my husband, not brother as some people have asked, also co-founder and co-CEO) taught philosophy to around 500 children – not bad for one person! Now we work with around 5,000 children every year, reaching over 40,000 children over the last 10 years thanks to our wonderful team of philosophers who really are an incredible bunch.

As a quick introduction to who we are and what we do here is a short film made by Matter & Co earlier this year. 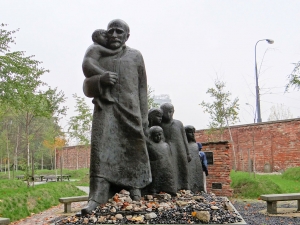 So, after a film about storytelling, I’m going to tell you a story:

In October last year we were introduced to Eva Hoffman by Professor Jonathan Woolf. Eva is an American-Polish writer who lives in Britain and was interested in our work. One of the first questions she asked Pete was “Have you heard of Jasnusz Korczak?”, a Polish educator, author and defender of children’s rights who died in 1942. “We share offices with him!” Said Pete - obviously this was not entirely accurate, but let me explain: it just so happened that we had earlier that month moved into Forest Hill library and had indeed heard of Korczak. The Library and surrounding buildings were all built within 25 years of each other with the purpose of educating and caring for the poor. The building next door to the library is Louise House, a former children’s home. We found out about Korczak through a talk at Louise House. Korczak had visited the home in 1911 and as a result was inspired to develop his own children’s home in Warsaw.

Born to a Jewish family in Warsaw in 1878, he became an agnostic in later life who did not believe in forcing religion on children (one for you Anthony & Stephen!). After his visit to the children’s home in 1911 he became a director of Dom Sierot in Warsaw, an orphanage of his own design for Jewish children. There he formed a kind-of-a-republic for children with its own small parliament, court, and a newspaper. Korczak wrote that the “the key to a happy and useful adult life lay in childhood; hurt the child and you hurt the adult.”

In 1942 Korczak, 12 members of his staff and 192 children at his orphanage were rounded up by the Nazis. Korczak was given the chance to escape but he would not abandon his children. The group was transported to the Treblinka extermination camp; that is the last that was heard of them.

One of the aims of this evening is to bring about a project that has grown in importance to us over this last year after finding out about Korczak, through conversations with Eva and other colleagues, and by working with the team at Brent council who support young children in care.

We know philosophy helps to develop important educational skills particularly for disadvantaged students. And though we reach many of these children through our regular school work we want to try and reach out to the most disadvantaged and vulnerable children through this new project. So next term we are hoping to run two projects with children in care, and any funds we raise tonight will be put towards what we are calling: the Korczak / Hoffman Project. 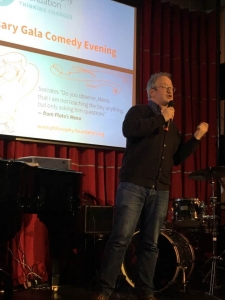 We are currently living through one of the most austere times in education. Money is scarce but programmes that help children think better and more clearly are needed more than ever. As a result of the austerity we are having to find new ways forward, and this project is part of our attempts to reach out to the most disenfranchised and to continue to work with those who need it most.

Thank you for coming, I hope you have a wonderful evening, and I will now hand over to our amazing host and patron Robin Ince.

Thanks to everyone who came on the evening, and to those who have donated beforehand: we have raised enough money to be able to run two projects next term with children in care in Brent. We hope this is the beginning of a new way of reaching out to these vulnerable children.

We keep our core costs low to be able to reach more more young people and the disadvantaged. But we need help. Please give anything you can to help us achieve more this coming year.

You can help us by donating via paypal - the more you give, the more we can give.