Can a Rabbit be a Scientist? 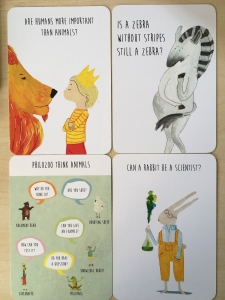 Today’s philosophy class was about science. That was decided last week, when we talked about the brain and the mind (we also talked about the soul, but that problem was easily solved). Having an idea or being convinced of a certain opinion is not science, but does it become science as soon as I add some facts? Hm. “Maybe the rabbit can help us”, I said and that’s where today’s class started. Thanks to Jelle and Eef and colleagues (PhiloZoo) for the wonderful drawings / cards.

We started with the things we could easily agree upon:

New question 1: does this mean that actually they’re smarter than we are, because they have to do the same things as we with a smaller brain.

New question 2: can you have a smaller brain, but have larger brain cells?

Then we moved into more difficult terrain with the question:

isn’t what the rabbit does just ‘common sense’? And isn’t science supposed to be something else, something extra? Look at the humans: not all of us are scientists, but we’re all supposed to learn from our experiences.

That’s true, but you can teach humans to become scientists...

One student said she has seen a video in which they taught rats how to drive a tiny mini-car. So rats can become car drivers. Then it must also be possible to teach rabbits to become scientists. I could sense how the minds shifted, move after move, this way or that way. 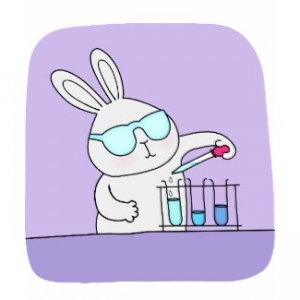 “My rabbit can do it”, a girl says and raises the drawing she has made in the meantime, and adds: “It is a Harry Potter 3 rabbit”. One of the boys is not impressed: “but rabbits don’t have hands; they can’t hold an instrument”. Is this where rabbits who wish to become scientists finally meet their road block? Not yet, because this argument too is countered: being disabled (a human who has lost his arms or is lamed) is no reason for not being able to become a scientist. Rabbits who want to become scientists are saved by the Disability Act.

I had promised the class that we would discuss a few of the other cards and there was not much time left. First we took the zebra without stripes, born in a zoo, to ‘the scientist’ and asked the question: “Is this zebra without stripes still a zebra?”. And then we were the scientist and answered our own question: yes, he’s still a zebra, because that is his species and that hasn’t changed. One of the boys added, as a kind of consolation, that if you see that the zebra is unhappy, because to him it does not feel that he is a real zebra, we might paint him some stripes. And then we took the horse, who had kicked a boy in the shin and broke his leg, to the scientist to determine whether the horse had done it on purpose. Which led us into a discussion on what you can see on a brain scan and what you can’t. We assumed that the answer would be that you can’t see that on a brain scan. So isn’t there a way to ask the horse: ‘why did you kick the boy?”. A raised hand: “I have an idea”: babies have a universal language ability (the boy said it like this, as if he had attended a 101 course on Chomsky’s universal grammar the day before). So we could raise a baby among horses and (s)he would learn to understand and speak Horsian. And then we’ll teach the grown up baby (a child by then) English and then horses and humans can communicate through him / her. Or not? 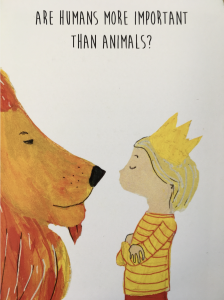 OK guys, I said, time is up. Here is the topic for next week; it’s called “Wittgenstein and the lion”. Ludwig Wittgenstein was a famous philosopher and somewhere in his notes he writes: “If a lion could speak, we could not understand him”. Why not? And what is that – to understand somebody? And by the way, how do you stand when you under-stand? That’s something for the weekend, to try out at home.

The rabbit tea cosy, which I had taken with me from home, stayed when a left. Two girls volunteered to take care of him – like a class pet and a true friend of good questions.

Afterwards one of the boys walked me to the front door and casually said, with a first imitation of an adult voice: “Mr Pieter, it’s the only class where I do write a lot”. “Interesting”, I said, “may I ask what kind of things do you write?”. “Well, could be some thoughts, but I particularly like rhetorical questions”.

A bit of context: the Royal Institute of Philosophy is currently funding schools who have never had any philosophy classes to have a professional philosophy teacher for ten lessons through The Philosophy Foundation. The school where I currently teach is a Church of England school in a small village east of Lincoln. My class is a Year 4 one (age: 8 – 9 years). The sponsorship includes my fee + GBP 200 for books in the school library. Excellent initiative.