How to use poetry for philosophy enquiries

When National Poetry Day and World Poetry Day come around each year I like to use poetry for all my philosophy sessions where possible. I usually write some more Thoughtings and a blog. This year I have got a little over-excited about poetry. Because I love it! So this is the second blog on poetry which follows on from my previous blog post ‘Why Poetry? Because it is like the TARDIS…’

Something similar to what follows can be found in the appendices at the back of Thoughtings together with a sample lesson plan around one particular Thoughting. The poems in that collection have been written specifically to do philosophy with, however philosophy can also be done with many other poems not written to do philosophy. With that in mind, I’ve put this together for anyone who wishes to start using poetry as a starting stimulus for doing philosophy but who lacks the confidence (or a procedure) to do so. This is only a guideline so the word to bear in mind is ‘variation’ – play around with this structure to best fit your aims, your class or group and your poem. All the poems mentioned here can be found by following the links in my previous blog ‘Why Poetry?…’ 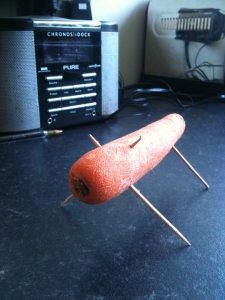 Remember: the above procedure IS NOT philosophy – it is merely a procedure for philosophy to happen in, although philosophy will only happen if the discussion is facilitated well. For a more detailed explanation of how to manage the enquiry (7) itself – the bit where the philosophy happens – see The If Machine pages 1-45 or ‘If it, anchor it, open it up’ in the forthcoming The Socratic Handbook. (‘If it, anchor it, open it up’ is also available FREE, for members of SOPHIA, as a download from sophianetwork.eu in ‘Resources’.)

Finding a question in a poem

Sometimes a poem explicitly asks a question such as ‘Some Opposites’ by Richard Wilbur in which it ends:

What’s the opposite of opposite?

That’s much too difficult. I quit.

In this case, the poet’s surrender sets up the class’s challenge. But where a question is not asked explicitly it can quite often be hidden, such as with ‘Invictus’ by W.E. Henley where it ends with these two lines:

I am the master of my fate;

I am the captain of my soul.

To make a question, simply ‘question’ these lines: ‘So, are you the master of your fate? Are you the captain of your soul?’ See also Hamlet: ‘What is the question?’ or (also Hamlet) ‘Is it true that there is nothing either good or bad but thinking makes it so?’ Or Shel Silverstein’s ‘Listen To The Mustn’ts’:

Anything can happen, child,

When using poems to do philosophy I prefer to select poems that have one of these two options, an explicit question or an implicit question. If the poem has neither of these opportunities then it will be harder to do philosophy from, but that doesn’t mean it’s impossible or that the poem is no good for philosophising from. What it does mean is that it will require a bit more thought. For instance, the poem ‘An Owner’s Complaint’ has neither an explicit nor an implicit question but I have found that the following question works really well for an enquiry: ‘When is a dog not a dog?’ and part of what makes it work is that it contains what appears to be a contradiction (see my previous post Why Poetry?) Note: this question also gives an excellent question structure for general use: ‘When is an X not an X?’ Some children resolve the contradiction, for example, like so: ‘An ‘X’ is not an X when…’ (resolved here by the use scare quotes). Many of the Thoughtings poems are like this: they have lots of questions in them. As a general rule, one difference between a Thoughting and non-Thoughting poem is that Thoughtings tend to only raise/ask questions rather than answer them. This makes them easier to find questions in but it is worth noting that a poem that ‘has answers’ has more to disagree with.

For instance, ‘What is Truth?’ by Steve Turner:

The truth is what’s what;

A lie is what’s not.

Here, the best question to ask a class, I find, is: ‘Do you agree with the poem/poet?’ A good strategy for possible use here, especially if the children do not do so automatically, is to ‘task’ them to seek out a counter-example: ‘Can anyone think of a situation where the truth is not ‘what’s what?’ and ‘Can anyone think of a situation where a lie is not ‘what’s not’?’ and so on. 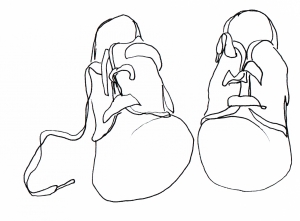 Here’s a couple of brand new Thoughtings to get you started:

My shoes walk me; I don’t walk them.

I don’t write stuff down; that would be my pen.

I don’t do the thinking ‘round here; it’s my brain that does it

And the deciding, desiring, and then the inquiring about it.

It’s my heart, not me, that sometimes likes, hates and loves you.

And all this is quite a part from the other things I don’t do.

So what do I do when all is said and done?

What’s left for me to do?

To remove my shoes

My trousers ran away today

We tried to catch ‘em up

They ran and ran

When asked why they’d run away

They simply said, ‘No more

Will we do what our wearer wants –

That’s not what we are for!

We want to wear our owner

And stop him donning gingham!’ When

M’ strides were done, I laughed out loud –

These Thoughtings would work well with ‘It Wasn’t Me!’ and the ‘Are You Free?’ section in Thoughtings by Worley and Day.

Peter Worley | Getting Deeper with Poetry

Why poetry? Because poetry is like a TARDIS: paradoxical and much bigger on the inside.

Stories are great, but now Pete explains how to use poetry to stir up some philosophica... Read more