Is there a meaning of life and can philosophy help? 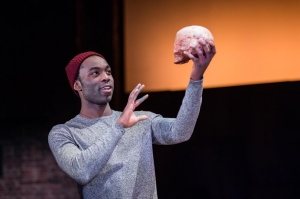 I saw the RSC’s – in my view wonderful – latest production of Hamlet recently, and the scene that most struck me was the Yorrick scene (‘Alas, poor Yorrick. I knew him, Horatio.’) The way that Paapa Essiedu looked at the skull provided the perfect symbol for man contemplating man with the acute awareness of his mortality. As many in the audience recognised, he was looking not at Yorrick but himself. Once you get past the fact that Hamlet (the play) sounds like the author has raided his copy of the Oxford book of quotations, and if the actors are able to imbue freshness to those well-worn words – as they very much did in the performance I saw – then you can’t help but consider the play’s ‘question’. But what is the question?

The meaning of life; ‘that is the question’.

But before I make my case for why philosophy might help with ‘the question’ – and in order to set this up – I’d like to visit another great work of literature. In the Odyssey there is a story about a group of islanders that harvest a fruit to make a juice that has a special property, the property to invest permanent happiness and forgetting (of woes and troubles) to any who drink it. Odysseus is offered this juice while he is on the island. If you were offered the juice, would you drink it? What does your answer tell you about your values? When I tell this story to classes of children and explore their answers to this question, common answers I receive are 1) yes, he should drink it because happiness is good, and 2) no, he shouldn’t drink it because he’s got to get back to Ithaca, to his wife and child. Here, family is what matters.

When (for instance, Will Self in a programme for BBC Radio 4 on the search for the meaning of life) people talk about the search for the meaning of life, very often they express it as an object to be sought, like a table in a room. This is a mistake. I think one needs to think of it as something you create, or, as Mark Hollis of the 80’s band Talk Talk said, ‘Baby, life’s what you make it…’ But the point I’d like to underline is not just that ‘life’s what you make it’, but that, as Hollis says next, [you] ‘…can’t escape it’. And this is at the heart of my argument for why philosophy matters to you (none of which, I’m sure, will be original, but it can sometimes be fruitful to revisit and repeat these themes, although not for the first time, afresh and responsively).

I believe that a characteristic of being human is that when we recognize a problem as a problem we cannot help but engage with that problem. For instance, if I illustrate, as I often do in classes of children, the problem of ‘the ship of Theseus’ (briefly: if a ship has its parts gradually replaced over time so that, eventually, all the parts have been replaced, is it the same ship as when it first set out? And, if not, then at what point does it become a new ship?), there’s a point at which the problem ‘bites’ – or when they see ‘the rub’. This happens when the class (or, at least, members of the class) see that there is a problem, and this happens when they see that there are plausible reasons why it is the same ship and – at the same time – that there are plausible reasons why it is not the same ship. This results in an apparent problem that can be expressed like this: it both is and is not the same ship, which, on the face of it, appears to be a contradiction. And our rational mind doesn’t like contradictions. The problem is now an itch. Of course, some will not scratch because they do not see this as a problem, and so may not respond to it as such: engagedly (if you will). But, for those that see the problem as a problem, my contention is that they are engaged – that that’s what it is to be engaged. How one responds to that engagement is another matter. I’ll come to that.

What we see in Hamlet is a young man who has seen the problem of the question of the meaning of life as a problem and (I’ll say, consequently) he is fully engaged and responsive to the problem. The next problem for Hamlet is how to respond.

One objection to the ‘Odysseus and the Lotus Eaters’ story thought-experiment that I put to you earlier is that it’s not real, it’s not present; it’s just a hypothetical story so we don’t feel any existential urgency – we don’t know what we’d really do. There are responses to this such as that we can still learn something about our values from how we respond to it in the hypothetical even if it’s a different response to the real-situation-response. However, I’ll take a different tack: I’m going to place the juice in front of you so that it is no longer hypothetical; your response will therefore be authentic. You do have the option to no longer read on, unless you’ve already anticipated my argument (actually, I’ve already made it by implication), and in which case that option is no longer open to you. And if you haven’t anticipated my argument I hope your interest will be sufficiently piqued (another way in which one becomes engaged). So, now to spell it out:

My first claim is that the question of the meaning of life is intrinsically problematic once recognised. The reason for this is that once seen you cannot escape addressing the question for yourself, whatever strategy you adopt. So, for instance, if you decide to defer to religion to provide meaning, you still have to decide just how religion does so. And even if you decide to ask a religious person to tell you how to respond to the problem or read the bible, firstly, you decided and now you still have to make sense of what they say or what you read. The problem of interpreting or making sense of the meaning of life is always there on your doormat no matter what you do or where you go. I believe this to be an inescapable existential fact about us all.

My next claim is that the question of the meaning of life is only a problem if you see it as one. It is not, for instance, a problem for animals. Surviving life is a problem for animals, but not the question of the meaning of it. This is also because a problem like this is a felt thing, an experience or apprehension. It’s not like a table in a room: an objective feature of the universe, though it can be a shared apprehension; so inter-subjective, not merely subjective.

So, whether you have done so already in your life – like Hamlet – or not, I now invite you to consider the question of the meaning of life by placing the juice in front of you. If I’m right, you are now condemned to consider it, as Sartre might say, so ‘invite’ may have been a polite euphemism. However, all this is only true if you see what it is I’ve called ‘a problem’ as a problem. In other words, ‘thinking makes it so’. The problem is, in this way, self-determining: if you simply don't see the problem you may comfortably ‘jog on, the footpath way’. If you do see the problem you will now have to decide how to respond. If you’ve seen the problem then even ignoring it addresses it.

And this is why philosophy matters to you. Because the question of the meaning of life is, once apprehended, inescapable and inescapably philosophical. And through the discipline of philosophy one can meet with other minds on the issues and questions, and thereby avoid Hamlet’s maddening isolation; one can also find methods for making the approach in some way systematic, one is given the opportunity to properly think through the questions in a way that is engaged and genuinely open (unlike, for instance, religion). But perhaps most importantly, for those that share my – and Hollis’s – view that ‘Life’s what you make it’, through philosophy one can actively engage in the making of the meaning as it pertains to one’s life and the lives of others.

Let us return to the story of Odysseus and the Lotus Eaters. What the children don’t know when they respond to the question I put to them, ‘Should Odysseus drink the juice?’ is that (spoiler alert!) the crew never get to return home: they all die! Does that mean that they should have drunk the juice? I’d say no. Meaning, purpose and value in life is not contingent upon the consequences and should not be calculated as such. I would go as far as to say that even if doing philosophy unsettles and reduces one’s immediate happiness it is still worth doing because of the way in which it engages one fully and presently with living. So, I think in this respect I may disagree with Socrates that ‘philosophy is preparation for death’; it is preparing for life and for living. So, I agree with Hollis when he says: ‘Life’s what you make it, celebrate it.’

Here’s a lesson plan for Years 6 and up (and able Y5s) on Stoic-related themes for Stoic We... Read more

By Tim Raynor, author of: Life Changing: A Philosophical Guide When a senior politician is ... Read more

Katy and Tim, two newly trained specialists with The Philosophy Foundation were involved with a &... Read more