As well as getting the children interested in storytelling and writing, this unique literacy project with 9 year-olds at Holy Trinity Primary School, was a way to engage the children in philosophy. Each week I presented philosophical problems through stories, mostly from Once Upon An If - The Philosophy Foundation's 'storythinking' handbook. I found it was a great way to open up conversation and help children explore different philosophical themes.

The class at Holy Trinity were one of the most confident and excitable classes I have had. Each lesson would end with a groan from children who felt they hadn’t quite had the time to say everything they had wanted. Each week I would try to get around as many children as possible, but often some children really seemed disappointed that the session had to end – even if it meant playing a game instead of continuing the dialogue! 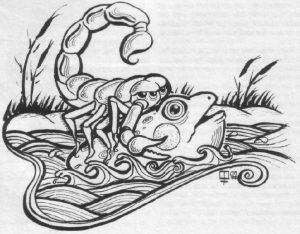 Through my training at The Philosophy Foundation I knew that to get the most out of these sessions the children had to take control of the discussions and lead where they would go. Through the feedback from the children in the final session, it struck me that the lesson that had stuck with them most was the one we spent the most time exploring. It may be that it stuck with them because we had spent the most time on it but I think it was also partly because it was a session that were the most invested in, due to the storytelling nature of the session. The enquiry I did with them was ‘The Frog and the Scorpion’, taken from The If Machine. I had intended to only spend one lesson on it, not doing the entire lesson plan, but simply introducing them to themes of responsibility, blame, free will and weakness of the will through one of my favourite stories in this book. However, after the end of the first session it was apparent that the children were not finished with the conversation. Although I had a different lesson planned for the following week, I decided I would continue doing ‘The Frog and the Scorpion’ with them the following week. We ended up spending three weeks on this enquiry.

Each week I told them a different variation of the story. So in week 1 I told them the story of ‘The Frog and the Scorpion, in week 2 it was ‘The Robber and the Ferryman’ and in week 3 it was the story of ‘The Friend and the Thief’. Each week I tried to be more absent in the conversation, removing myself physically from the circle and making it so difficult for them to crane their necks around to try and talk to me, it was easier for them to refer their answers back to the circle instead. When I did this they naturally started taking more control, and wanting to pass the talk ball on themselves without passing it back to me. There were also more replies and responses when I did this method. Practically this wasn’t always possible to do – the classroom was small so being on the outside was not possible then but when we were able to use the hall, I was able to take advantage of the space.

In the lesson plan for ‘The Frog and the Scorpion’ there was a note at the end from Peter Worley to say that at the end of the session, he usually introduces them to three philosophers and their views on free will. I was apprehensive about this, wary that I wanted to do philosophy with the class rather than teach. However, with a bit of time left in the final session I did introduce the children to some philosophers which I do think helped ground their ideas. I had three volunteers to be my mini Schopenhauer, Sartre, and Aristotle, and gave them name tags to reiterate that they had now morphed into mini versions of the philosophers. After explaining what each of these philosophers argued, I asked the class what they thought the philosophers might say in response to ‘The Frog and Scorpion’. Some of the children seemed to find it difficult to explain the ideas of another philosopher and apply it to the session, although they were able to recognise that their ideas were either similar or different to their own. At the end of the session my mini Sartre volunteer asked “can I keep this sticker and be Sartre for the day?” Of course I thought this was a great idea, and I love the idea that he might have gone into the playground, with other children asking about the meaning of his name change, and that for the day he could be this French philosopher committed to absolute freedom.

The feedback in the final session also showed me that, for some of the children at least, they were aware of the wider significance of these philosophy sessions. One girl in particular went on to say that "philosophy teaches you to debate and what to do in daily life." From this she went on to say that her favourite session was ‘The Frog and the Scorpion’ because of the level of debate that was involved in it. She took this as an opportunity to carry on the debate here, taking examples from recent events such as the terrorist attacks. She explained that no one is born bad - no one is born a terrorist - you learn it. Although there was no time to continue this discussion, it was encouraging that she was able to abstract the story and apply her ideas to a real life situation.

Since this was a literacy project, each session was more story based than other lessons such as those found in Once Upon An If, but I think this was a great tool as something for the children to latch on to. As a chatty and lively class, there was always complete focus and silence during the stories, allowing the philosophical discussion that followed to be rich with ideas.

Katy Baker is a specialist philosophy teacher with the Philosophy Foundation. She also works at Philosophy Now magazine which aims to bring philosophy to the wider public as well as those who already have an interest in philosophy.

If you would like to get in touch with Katy or hear more about this project please email: info@philosophy-foundation.org

Is there a meaning of life and can philosophy help?

Peter Worley reflects on the meaning of life through Hamlet. Read more

In this second blog about our 'literacy and philosophy project', run by The Philosophy Fo... Read more