I train a lot of teachers in questioning and enquiry techniques both for use in philosophy sessions with their classes but also for use in their normal curriculum teaching. I often witness enthusiasm for the techniques during the training, however, especially with secondary school teachers, I also often see a big drop off of enthusiasm after the training. One major reason I have identified is to do with a perceived lack of immediate relevance. So, during the training the teachers really see the value of the kinds of enquiry skills that I teach, but when under pressure to meet the demands of exams and coursework, the same teachers very often don’t see that they have time for these enriching – but time consuming – discussions.

I recently had an experience of exactly this kind of attitude-shift when I went to observe a secondary teacher who, as part of his training in enquiry and questioning strategies with me, had me visit his classroom to observe him deliver an enquiry session. By the end, however, the same teacher had an epiphany about how the enquiry techniques were much more relevant than he’d at first thought. He said to me, ‘This is what my colleagues need to know about how this philosophy stuff works.’ Then he added, ‘This’ll sell it.’ So, in this piece, I thought that I’d share what happened in order to make a case that running enquiries with your class is relevant and worth the time it takes out of your lessons – and that it’s also relevant to secondary teachers who find themselves up against it.

First of all, just to highlight how ‘up against it’ the teacher was, he’d forgotten that I was visiting at all! After apologizing, he took me to his classroom where about ten students, girls and boys, preparing for their history GCSE were sitting. On the board was this image: 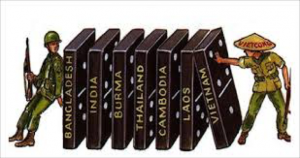 With this question underneath:

Was the ‘domino theory’ a good reason for the Americans to go to war in Vietnam?

He was about to scrap the lesson so that he could run the philosophy session he was planning to run (from my book) for the observation. I looked at what was on the board and, with an eye on making my presence in some way relevant, I said to him, ‘Why don’t you run the session around what you’re doing?’ In a brief discussion with him about how to do a philosophy session around this, I said, ‘Well, one way to approach this is to abstract a little from the more concrete question you have on the board. So, maybe something like ‘When, if ever, is it okay to go to war?’’ With a philosophical strategy I have developed called the ‘Hokey Kokey Method’ in mind, I suggested he start with his question – the one already on the board – and then move to the abstract question, returning to the concrete afterwards. He agreed and proceeded to commence his session.

Here’s the Hokey Kokey Method (in, out then in again) structure in brief:

He chose to begin his session by ‘unpacking’ the image, which I thought was an excellent way to start (at The Philosophy Foundation, we would employ what we call a ‘hermeneutic question’, which means a question that aims to have the students interpret, or ‘unpack’ an image or text etc. For instance, ‘What is meant by X?’ or ‘What do you think X means?’). However, he displayed all the usual teacher tendencies to lead the interpretation himself, either by filling silences with his own interpretation or by asking leading questions that included ‘the right’ interpretation. As a brief aside, I recommended to him – and will do so now – for unpacking images, a strategy known as ‘Visual Thinking Strategies’ (VTS) which can be found described in detail in a book called Visual Thinking Strategies by Philip Yenawine. The basic idea is that you allow the class to come to the image naively and work out from there with simple questions like ‘What do you see?’, ‘What do you think that might mean?’, ‘Why do you think X is there?’ etc.

After he had spent a short time unpacking the image he then moved to his question, at which point his questioning style changed completely. He began to use the techniques I had shared on the training course, passing the ball to speakers, limiting his responses to simple opening-up questions such as ‘Can you say more about that?’, ‘What do you mean by…?’, ‘Can you give an example?’ etc. Then he moved to the abstract question, ‘When, if ever, is it okay to go to war?’ I could see in his face and his demeanour that he felt it was no longer relevant; that the discussion, interesting though it was, had now turned into something that he couldn’t see impacting valuably on his lesson time. One of the students said, ‘It’s okay to go to war if it’s self defense.’ The teacher took the ball to pass to another student. I wanted to demonstrate how the Hokey Kokey Method works, so I intervened; I turned to the student who had just spoken, and using a technique I call ‘iffing and anchoring’ I said, ‘So, if it’s okay to go to war in self defense, does the domino theory appeal to self defense?’ (This technique ‘ifs’ what has been said and then links it (‘anchors’ it) back to a main question.) ‘In a way it does, because…’ said the student. I have already ascertained from the group that they were unanimous in their view that America was not justified going to war in Vietnam on the basis of the domino theory. One student had said that self defense was one reason why it might be justified and had now reconsidered the domino theory to be, in some way, a self defense justification.

This was the point at which the penny dropped. Suddenly he saw how, using the Hokey Kokey method, a philosophical enquiry could directly impact on a non-philosophical discussion and how the abstract part of the enquiry could be directly used to test the student’s ideas and intuitions about the concrete question they were being asked.

In addition to this, we also observed how the technique worked for the less confident too. Those that were not sure how to answer the ‘domino theory’ question, and therefore responded to the teacher’s invitations with silence, were able offer something if he followed this up with the more general question, ‘So, are there any good reasons to go to war?’ and then, (iffing and ‘inferencing’) ‘So if X is a good reason to go to war what does that mean, if anything, about whether the domino theory is a good reason to go to war?’

So, using the Hokey Kokey Method, philosophy doesn’t have to be a discrete part of your week, squeezed in among all the other things competing for space; nor does it have to be that session where the discussions are great but with little or no application. Philosophy enquiries should be seamlessly integrated into your normal teaching; your good teaching.

For more on ‘iffing, anchoring and opening up’: https://kcl.academia.edu/PeteWorley

In out, in out, shake it all about

On The Philosophy Foundation blog recently, we have seen posts by Pete Worley on the Hokey Kokey ... Read more

Steven Campbell-Harris, one of our experienced philosophy specialists gives a new twist to Pete... Read more

Interesting that the teacher had forgotten that you were visiting and then the Aha moment arrived, and by asking different questions, it then opened up other possibilities to ask differently, well done !