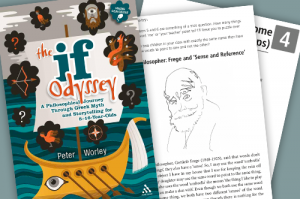 Steven Campbell-Harris is a Philosophy Foundation specialist working a number of schools in London. He tells us about how the story-telling and philosophy sessions helped both the class and the class teacher. Here's Steven blog:

"I worked for a term with a year 5 class doing the If Odyssey project. It is based on Peter Worley's book of the same name which breaks Homer's epic in to 14 sessions of story-telling and philosophy, for children. I used a lot of different techniques like response detector and mini-debates to develop discussions in the classroom. Over the course of the term the teacher said that the children:

The school - St. Joseph's in camberwell - is in a fairly deprived area with a lot of social housing and many of the children are on free meals and a majority in the class are from minority backgrounds. There are also many EAL speakers.

Initially the class were quite rowdy when I began the session and had a bit of a standoffish attitude to storytelling. There was no teaching assistant- just the single teacher present- and it was clear that she was somewhat overloaded with behaviour challenges. The class's attitude shifted considerably, however. Over the course of the 13 weeks it got to the point where only mentioning that we would carry on the story would be enough to calm the class down. The group would monitor each other to become silent to listen to the story. One thing that consistently began to creep up is the children's capacity for analogy- they would begin to compare the If Odyssey stories to Percy Jackson, the Chronicles of Narnia and others. Outside of philosophy classes the teacher said that they were more engaged with controversial questions in other stories as a result of doing the Odyssey.

Later in the term when I was preparing for a lesson the teacher came to me and said that she wanted to thank me. She had just had an 'outstanding' lesson inspection and she said she couldn't have done it without me. She mentioned using some of my techniques (including the response detector) in her lesson and said that because of the philosophy sessions an environment for discussion had developed that fed into the English class. She was quite effusive and said that she thought the philosophy had really helped."

Want to bring enquiry and philosophy into your workplace or educational setting contact info@philosophy-foundation.org

5 year-olds run their own philosophy sessions - a case study

Steve Hoggins is a Philosophy Foundation specialist working with the Gipsy Hill Federation i... Read more