On a cold and windy Monday in February we took our group of Young Philosophers to the Houses of Parliament.  But we were soon warm and excitable again as our lively tour guide filled the children’s heads with the rich history of the building: distinguishing the real from the fake gold; reminding us that we were not allowed to sit down in the House of Lords, as we weren’t Lords and Ladies – yet!  Revealing that the fancy seat with the curtain around it in the centre of the House of Commons was in fact also a toilet.  And next time someone asks ‘what’s the one thing you can’t do in the Houses of Parliament?’ after learning about how many people the Kings and Queens of England have ordered to have heads chopped off, I’m sure we won’t forget the answer is that the one thing you can’t actually do inside the Houses of Parliament is… die. 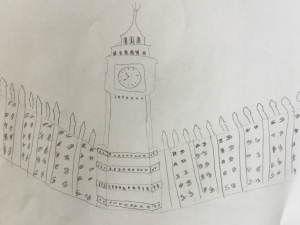 After the tour, we were directed to a special meeting room inside the grand building to meet with Vicky Foxcroft, opposition whip and Labour MP for Deptford & Lewisham.  The children were encouraged to voice their concerns for their neighbourhoods and enquire what it was that Vicky’s role enabled her to do about it.  As the children are starting to enter their teenage years, a few of them raised concerns about feeling safe in their communities – but is it the gangs or the police that they should be fearful of?

I think the main reason there is crime… it’s because they’re bored.

After one child revealed his conservative leanings and concern about how to stop people with guns, the questions turned onto the police and their use of weapons – should the police be armed?  One child suggested “they should be armed with guns in places where they can use them” but another child retorted that “they should be armed… only if they give non-permanent injury.”  Many of the children had noticed that the security police around the Houses of Parliament were carrying guns which may have prompted the next comment from one of our Year 7 students:

I don’t think policeman should just be walking around with guns, because that would be unsettling.  If the police had guns, I would be (1) unsettled and (2) afraid.

We may not have solved the problem of gang and police violence, but the children and Vicky were certainly stimulated to think hard about the issues.

Vicky explained that the local governments are out there looking for the root cause of youth violence, and the children had plenty of answers.

It’s gang culture and what postcode you come from.

If one parent is a drug dealer and one has died, it’s gonna be hard for them to know what’s right or wrong. 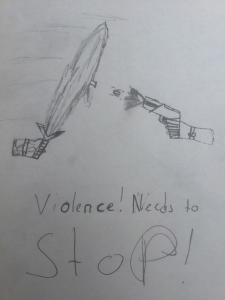 Vicky closed the discussion by pointing out that once we’ve figured out there is a problem, what do we do about it?  What can we do?  Our Young Philosophers showed us that they have a voice and ones that are growing in strength and confidence.  We will continue to build on that strength when we take them to think about and have a go at editing a newspaper at the Guardian on our next trip this summer.

And to close this blog, here is a question from one of our Year 7s:

In our trip today, we learnt that the two houses of parliament aren’t the best of friends.  Q: Do you think that they should get rid of one of those houses so that making laws is easier?  Give a reason for your answer.

Please give your answers in the comments section below.

Good question! The House of Commons and House of Lords perform different but equally important functions, so I don’t think we should get rid of either. The Members of the Commons represent the people and propose and make laws, but the Lords perform a vital role in checking and shaping those laws and holding the government to account. Having said that, I (and many others) do think it’s time the House of Lords was reformed and that we should get rid of hereditary peers who have done nothing to prove that they have the skills necessary to run the country.