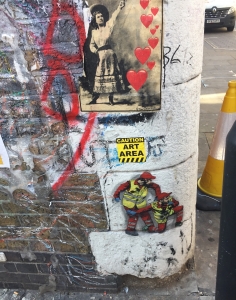 The Young Philosophers headed up to Shoreditch this month to explore the world of fashion.  For this trip, our team of young thinkers was made up of fifteen children from schools across South East London, aged 11 to 17.

On every philosophy trip, new questions come up that you don’t anticipate. Before we had even left St Joseph’s school questions were being raised:

Basically, you’re dying in your bed and then you die; when does it become your death bed?

And as it was the day of England’s match with Sweden, a controversy arose when Toni said that he wouldn’t be supporting the England national team. May raised the question:

May: Were you born in England?
Toni: Yes
May: So shouldn’t you support the team where you are born? 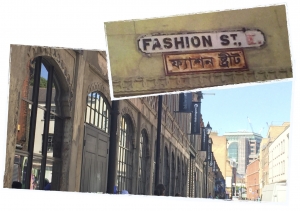 After navigating our way through the art-ified walls of Brick Lane we arrived at the Istituto Marangoni, a school of fashion located on ‘Fashion Street’, although the story about how it got its name is slightly surprising.  It was actually a misspelling of ‘Fasson’, the name of the two brothers who owned the land that the street was built on.  And now, coincidentally, it’s right in the middle of one London’s most fashionable districts.

Martina and Shaffia from the school showed us around, along with her colleagues Marco and Chiara, who introduced us to the many different aspects of fashion that were taught in the school, from design to styling and business, and gave us some history of Marangoni.  We learned about the role that the school, and the city of London in particular plays; influencing and shaping the students who go on to become the creators and shapers of so much of our visual world – as part of the fashion industry.  They’ve also got schools in places like Milan, Paris, Miami and others, but London has a very particular avant-garde street style that filters through the school to the students and future designers of our city.

As one of our young philosophers asked pertinently, “can you do a bit of everything?” the response was that there is just so much to learn in any given field, whether it’s designing men’s socks, or styling the latest big brands ready for the catwalk - you need each individual to become a specialist in something, and then it takes a team of people to create the clothes, couture and other fashion objects of the fashion shows and high street that we know today. 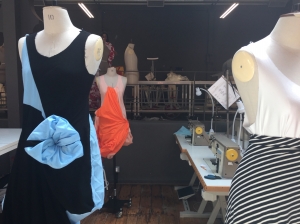 In the afternoon, we questioned the young philosophers about fashion.  What makes something fashionable?  Who decides?  How does anyone decide?

We were met by Tazos, a tutor from Istituto Marangoni who told us that ‘fashion designers are artists’ and also that pop artists do a lot to shape the fashion that we know and love.  He proceeded to demonstrate where inspiration comes from, showing us the steps from drawing a garment to creating, draping and reshaping the fabric of a garment.  The young people got involved in bringing their own elements to the designs and had a go at shaping things on the manikins.

We left having learned that fashion can be just about anything, and its definitely more than just clothes.  A soundbite from some of the children’s thoughts that popped up on the day:

There’s no such thing as ‘normal’ because everyone is different… but then if ‘abnormal’ means not normal, it also can’t exist, because it can’t exist without it’s antonym.

Thanks to everyone at the Istituto Marangoni for making it a really different day for our Young Philosophers, and thanks to them for continuing to inspire each other and our team of adults: Joe, Steven, Steve, Lewis and David.  The trip wouldn’t have been possible without sponsorship from RELX, so thanks also for their support.  We are looking for more sponsorship to bring the Young Philosophers Project to the next phase in 2018-19, so please do get in touch if you would like to help us continue developing these young thinkers.