“Huge number of young people believed to be behind vote that rocked Tories” claimed the Metro on Friday, “Early reports have suggested that as many as 72% of young people voted in this general election.”  Sounds like a great piece of news - one that we’d all like to believe.  But if we google a bit more, BreakingNews tells us that this so called 'news' might just be a myth as “(t)here is no official data to back this up – and there never will be.”  But is that source any more trustworthy… does google just tell me what I want to hear?  I guess we should keep on digging.  Or perhaps we can just think what we want to think and let our opinion rise to the occasion in spite of the facts.  And what makes a 'fact' a fact anyway?

On the same day the voting population wondered what was going to happen as they wandered into poll booths around the country, our team of Young Philosophers from several schools across Lambeth, Southwark and Lewisham were wondering themselves about what was going on in the world that day, and what ought to be talked about by editing their own front page of a newspaper in the London offices of The Guardian. 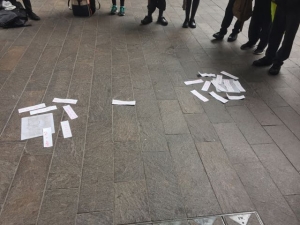 We spent the first part of the day having a variety of discussions and activities, starting with thoughts on how to distinguish different kinds of knowledge or belief, trying to distinguish ‘facts’ from ‘opinions’:

Which is fact and which is opinion?

And after exploring the urban, natural landscape just north of Kings Cross station, amidst ducklings, skyscrapers, canals and cemeteries, we considered which country was coming up with the best and fairest systems: should everyone pay the same fine when they are caught speeding in their car, like in the UK?  Or should people pay different amounts depending on how much money they have, like in Finland?

And what about when you get on an aeroplane.  Should everyone be allowed to carry the same weight allowance in luggage, like in the UK?  Or should you be weighed with your luggage so that each person carries the same total weight onto the plane instead, like in Samoa?

When we arrived at The Guardian for our 3.30pm workshop, the adults in the group were already flagging, but the  Young Philosophers continued to impress.  They were guided through the roles of sub-editor, photo-editor, production-editor and finally chief-editor as they pieced together a front page from real news stories prepared by journalists from the offices next door.  And as the day came to the end, their front pages were hung up and reviewed by our helpful workshop leader, Jan, as if ready to be distributed the following day.  Little did we all know at that moment that a landslide victory for Theresa May was no longer tomorrow’s news. 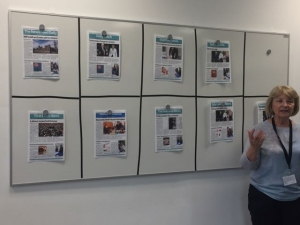 Interestingly, the pupils did not all decide to use the same stories; many put the election as front page news, but this was not unanimous.  Is it the newspapers or the people who decide what is important? It seems that in one sense when they are trying to sell papers, they have to work out what the public thinks is important and give them that. However, it is also easy to see how their choice of what is important, headline news might actively determine some of the public’s views about what is important when they pick up the paper the next day.

And this trip brings us to the close of our second consecutive year running the Young Philosophers Project in South East London. The Young Philosophers are a group of young people from south east London, offered this opportunity because they are good at (or enjoy) philosophy and crucially would not otherwise have opportunities like these. They range in year groups from Y6 (primary) and Y7 (secondary) – we hope to keep them together as they progress through secondary school with further excursions and exploration of philosophical issues on a termly basis.

We continue to seek out funding to continue this project and others like it.  Where should we take our brilliant young minds to explore next?  We invite your suggestions below.

Hey, thank you for posting the exact setup of this post. The team of dissertation writing service was looking for this setup and thank you that you shared with us.

Of course, your article is good enough, but I thought it would be much better to see professional photos and videos together. There are articles and photos on these topics on my homepage, so please visit and share your opinions. 사설 카지노 제이나인 제이나인 소셜 카지노 카지노 게임 종류 제이나인 제이나인 카지노 먹튀 검증 호텔 카지노 제이나인 https://www.j9korea.com/