The Young Philosophers Project is now in its third year at The Philosophy Foundation.  A crack team of nearly 30 philosophers from schools across South East London take part, philosophising in private and public settings.  Visiting places that range from the Houses of Parliament to Youth Theatre. The young philosophers are between 10 and 13 years old and have been selected not just because they have an interest in philosophy but, more importantly, are people that wouldn't otherwise get these opportunities.

We were delighted to be invited to Simmons & Simmons Law Firm for a tour of their impressive art collection.  Our young (and big) thinkers were taken up to Moorgate, to the offices of Simmons & Simmons to have a look around, think about the work they do there, and to experience making different sorts of judgement: aesthetic judgement of the art on show, as well as legal or personal judgement on a criminal case.

When we arrived, we were guided through the offices and corridors of the building to have a look at some of the best bits of art the firm has in its collection.  Our engaging and well informed tour guide, Jon, provided some thought provoking remarks which got everyone (adults included) scratching their heads and asking questions. 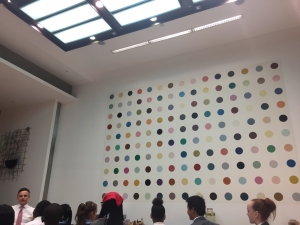 For example, we took a look at a Damien Hirst piece that was bought by Simmons & Simmons several years ago - painted directly onto the walls.  We were told that this was the second time they’d had the painting done for them.  Simmons & Simmons bought the rights to have the painting, even though it is not a singular thing.  Originally it was painted onto the walls of another building, then when they moved offices, rather than moving the wall it had been painted on, the painting had to be destroyed in the old building and then repainted in the new one… in fact when they had it repainted, it was agreed to be done much larger as they’d now got a bigger wall for it.  So we can ask ourselves:

Now to make things even more interesting, it was not actually Damien Hirst who came and painted onto the walls of the building, it was one of his workers who had been given precise instructions on a piece of paper, saying which colours to paint, how far apart to space each circle and everything else.  What does that tell us?

After exploring the offices as if they were more of an art gallery than a place of work, we asked the young philosophers whether they thought it was a good idea to have all of this art in people’s offices and meeting rooms… they had many good suggestions:

“Without art, it would be a blind world.  Art causes a deep mindset.  And you need that while you’re here.”

“It’s good to have art in a work place, because you don’t get to see the point of life without any drawings.”

“It’s naturally off key… audacious.  These things [art and the work of lawyers] don’t go together.  The gap is so immense, but they come together [in this building] so well.” 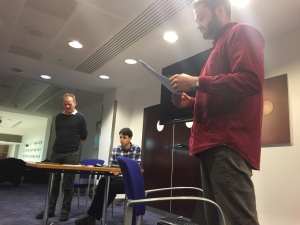 In the afternoon we were joined by two magistrates, from Magistrates in the Community: Kate and Bert.  They told us about their roles in court and what it's like judging criminal cases, especially those where young people have convicted of a crime.  After these introductions, we got to have a go, and set up an imaginary court room scenario, that went something like this:

Sam gets accused of stealing money from Alex and threatening him with a knife.  Sam defies the accusation with a plea of ‘not guilty’.  The prosecutor and the defendant make their cases for and against, then it’s over to the jury to discuss and decide their verdict.  Based on all of the current evidence can they determine if Sam is guilty?  They will need to be able to prove it beyond reasonable doubt, so how much doubt was there in this case?

After much pontification each mini jury declared their decisions, only to be confounded by an extra twist revealing that the testimony that Sam had given was false – but at the same time adding in the problem of peer pressure to make them wonder:

To reflect with some philosophical speculations at the end of the day, the group enquired about the difficulty of making these decisions.  There were so many things that felt obviously true, but were denied by the accused, so:

With minds full and ready to burst, we set off into the snow and made our different ways back to school.  The young philosophers were truly shining with ideas all day, so well done to all of you.  And thank you to all of those who helped make the day such a success, particular to Sarah & Jon from Simmons and Simmons, as well as Kate & Bert from Magistrates in the Community.  And also thank you to everyone who helped us at the schools involved for allowing their pupils to be part of this (we hope) invaluable opportunity, made possible by the generosity of our funders, RELX, and of course by our fantastic team of specialists at The Philosophy Foundation: Steve, Steven, Calum and Joe. 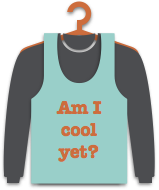 For the next instalment of the project in Summer 2018, the young philosophers get set to think about the world of fashion and what role it could play in forming who they are and what they might become.