Before I fill you in on all the details it must be said that the title of this piece is a little misleading. City Hall and Baddies were two separate things. Our young philosophers weren’t looking for baddies in City Hall…

On Wednesday 16th November, The Philosophy Foundation did some philosophy outside the classroom. A mixed group of 21 children, from two primary and four secondary schools in South East London went up to London Bridge for a day of questions and exploration.

We spent the first half of the day in City Hall.  After an airport style security check of all the children, we went to collect ourselves and our thoughts on City Hall’s giant floor-map of London. 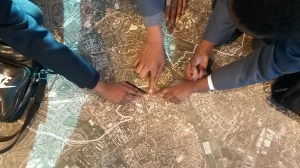 Hunting down the children's schools and homes

London’s Mayor, Sadiq Khan, was taking questions from the London Assembly in ‘The Chamber’ room above us, so we went to take a look. The Young Philosophers got to see the Mayor through the glass screen. They didn't really believe that they would get to see Mayor Sadiq Khan and where he works. When their eager questions 'Can we go in?', 'Can we take photos?' were answered with a 'yes' they were visibly awestruck. The London Assembly was seated in a horseshoe shape around the Mayor with ever greater horseshoes of members of the public seated in the upper parts of the chamber.  Topics covered included ‘immigration and borders’ as well as ‘google and tax’.  The children listened attentively, aware that the Mayor’s Question Time was being broadcast live on television. During their brief time in the assembly, several made notes on the issues discussed, even more took photos and videos to show their friends and family.

As we were leaving, the chair of questions name-checked all their schools, to the Young Philosopher’s surprises and pleasure. After we asked if anyone wanted to stay longer - a sea of hands shot into the air! They were engaged with what they saw, but sadly our time was up, we left the Chamber to go and get on with our own discussion – time for some philosophy.

Our theme for the trip was ‘Good & Bad’ so it wasn’t surprising that one of our Young Philosophers suggested that “the Mayor of London isn’t doing a great job.”  But then another child said “Sadiq Khan speaks his mind.”  So, we could ask: is the mayor a bad person?  Or, perhaps a good person with a bad situation on his hands?  Chelsea said “You can’t really tell if someone is bad” which Clodagh developed by saying “We’ll never know what is bad because there is no definition.”  Even Shakespeare can’t help us: “Nothing is good or bad but thinking makes it so.”  Perhaps Holly’s suggestion that “everyone is in between good and bad” is more apt. 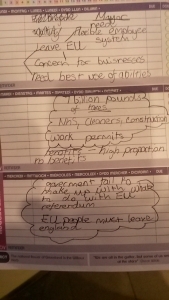 This is the second consecutive year we have been running our Young Philosophers Project, so the Year 7 pupils were used to doing philosophy in public places, but the Year 6 pupils soon caught on.  We imagined a town, somewhere in a world like ours, where the leaders wanted to let people in but only on the provision that they were ‘good’ people.  And how can we tell if they’re good people?  Daniel suggested that “if they have nothing to contribute to the town then they are not good.”  A stirring thought which provoked lots of challenges from other children…

"…you can contribute to a community in different ways." (Ashley)
"…children aren’t able to contribute, so wouldn’t be allowed in the society." (Regan)

This ran us in to a new question from Chelsea: “When you’re working out if you’re a good person, does it matter what you think or what other people think?”  Which led us nicely into the themes that the play could help us explore later. 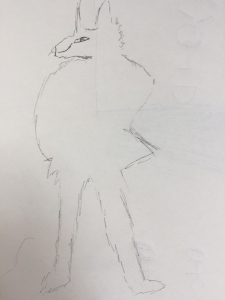 Young philosopher sketches the Big Bad Wolf.
Is he 'good' or 'bad'?

So after tackling the questions ourselves and expatiating further over our sandwiches next to the Thames, we went for some theatrical guidance in the neighbouring Unicorn Theatre, in the form of a spectacular show, ‘Baddies: The Musical’.  Bethel had already suggested that there are “two sides to every story” when thinking about our own behaviour.  And this play showed us exactly that – as the Big Bad Wolf put it, “I’m not a bad person, I’m a good villain.”

The main characters were baddies from fairy tales, offering us new insights into the complexities of being regarded as ‘bad’ and comparisons with being considered ‘good’.  One of the Ugly Sisters from Cinderella told us that “we are what we do as characters” and so if what we do is considered bad, then that’s what you are and must become.  The only escape from this ‘doomed to your destiny’ outlook, provided by Peter Pan was “don’t be you, be new” but this didn’t bode well with many of our young philosophers.  On the way home, one quieter child during the day’s discussion told me that the biggest thing he learned on the day was, “no matter who you are, you can’t change who you are.” (Raphael)

It may be the case that we can’t be changed by others, and it’s hard to know exactly how good or bad you are, even if it’s true as Eugenia put it, that “you only know yourself”.  But, by continuing to take our group of insightful little thinkers to do philosophy in public places and in places that they wouldn’t normally get to (or think to) go, the philosophy foundation intends to open these children’s minds to question the world around them and to explore their possibilities for the future. 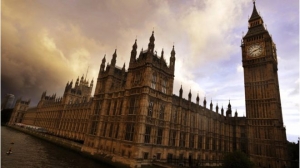 Next time around, we will be taking our young philosophers to the Houses of Parliament, in February 2017.  And you’ll hear more from us then.

If you are interested in offering an experience to the Young Philosophers group please contact the project leader joe@philosophy-foundation.org

Or if you would simply like to support us please check out our donations page.